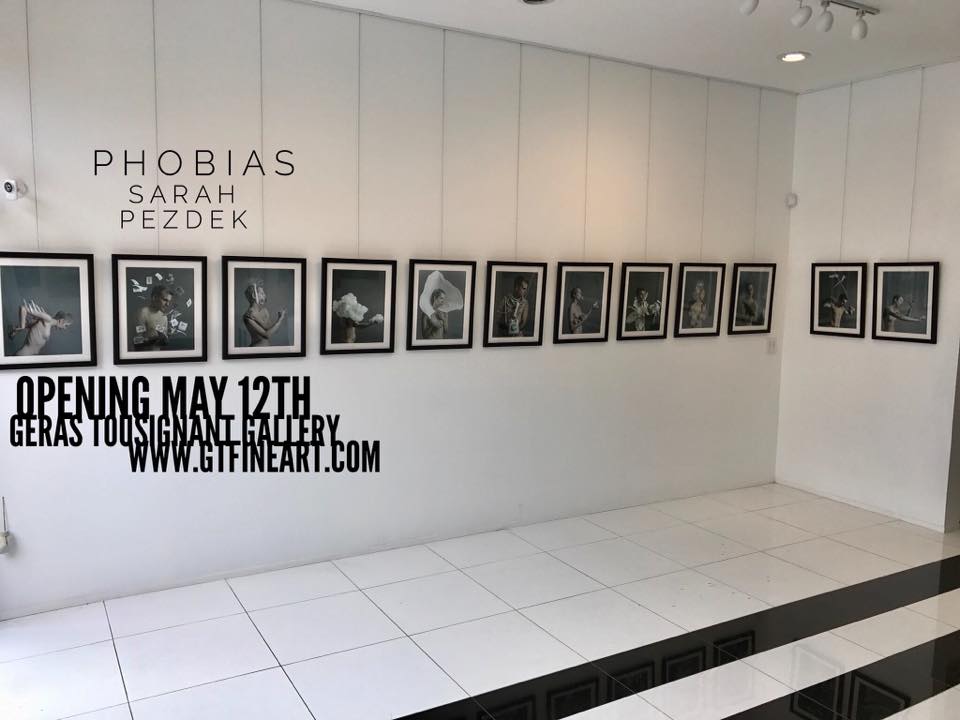 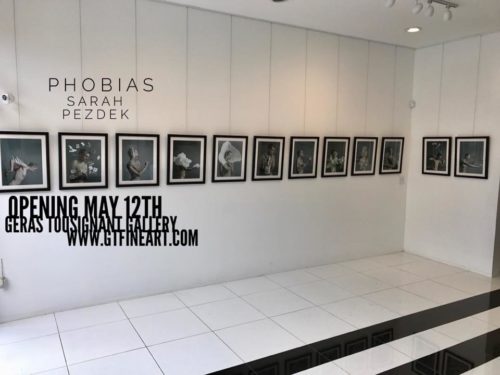 Regarding the exhibition of PHOBIAS, Pezdak explained, “Fear is the most powerful of all self imposed barriers that we create within ourselves. It limits our potential on every level of our existence. PHOBIAS is a series focusing on outrageous fears – by utilizing curated objects and symbolism, the images are an exploration of our internal power and how our fear can confine us.“ Subjects addressed in the series include Papyrophobia (fear of paper), Linonophobia (fear of string) and Globophobia (fear of balloons) and several others.

Sarah Pezdek, Linonophobia, archival pigment print, Ultra mat, 16 x 20 inch paper size – Image Courtesy Geras Tousignant Gallery
With the series Pezdek is aiming to create a deeper connection with my audience to reflect on their own barriers, and how to overcome them and feel the expansive beauty of that release. Pezdek explains her perspective that, “We are all interconnected, down to a molecular level. The more we share our experiences, the more we can transcend our boundaries so that we can better connect with the power that resides within ourselves. Thereby, further allowing us to connect and relate more deeply with each other and the universe that we inhabit.”

The exhibit is also a multi-media collaboration. Composer Ivan Iusco is creating an original composition inspired by the series which will be playing during the opening night reception and during the exhibition in Palm Springs.
Ivan Iusco is an Italian award-winning soundtrack composer, now based in Los Angeles, who writes music for movies, documentaries, videoart and television.

He debuted in the film industry in 1999, having composed the music for the Apulian cult movie “LaCapaGira” directed by Alessandro Piva, and went on to win Best Soundtrack at the Valencia Film Festival (2000). Today, he has his own record label and has over a dozen film soundtracks and albums released.
Sarah Pezdek, Aerophobia, archival pigment print, Ultra mat, 16 x 20 inch paper size – Image Courtesy Geras Tousignant Gallery
“I wanted to work with a gallery that was part of the new art scene in Palm Springs,” says Pezdek, “Geras Tousignant was a great fit for me and he is excited to include Ivan’s music so it’s a full, immersive experience which was important for me with this show.” Gallery owner, James Scott Geras, has been a fine art photographer for over 30 years and was named a top photographer by LA Weekly.

Sarah Pezdek is currently in the midst of working on several fashion projects based in New York City, and is a strong supporter of her local arts scene. Sarah is self-taught in both realms of photography and fine art.
Her clients have included:
Beekman 1802
SK- II
Estee Lauder
American Fine Art Magazine
American Art Collector Magazine
“The spectrum of my work, both personal and professional is broad – i shoot what i love and everything I shoot has meaning to me. I adore the challenges that each project brings and working to creatively approach each shoot with an artistic eye.”